In a report released last night and in a New York City press conference this morning, a number of global leaders, including former heads of state, called for drug decriminalization and the regulation of psychoactive drug markets. Those same global leaders are meeting this afternoon with UN Secretary General Ban Ki-Moon and his deputy, Jan Eliasson. 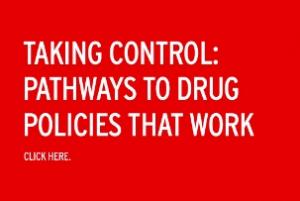 The report's executive summary lists a number of policy prescriptions, some of them quite breathtakingly bold:

Putting health and community safety first requires a fundamental reorientation of policy priorities and resources, from failed punitive enforcement to proven health and social interventions.Focus on reducing the power of criminal organizations as well as the violence and insecurity that result from their competition with both one another and the state.Take advantage of the opportunity presented by the upcoming UNGASS in 2016 to reform the global drug policy regime.Rely on alternatives to incarceration for nonviolent, low-level participants in illicit drug markets such as farmers, couriers and others involved in the production, transport and sale of illicit drugs.Stop criminalizing people for drug use and possession -- and stop imposing "compulsory treatment" on people whose only offense is drug use or possession.Allow and encourage diverse experiments in legally regulating markets in currently illicit drugs, beginning with but not limited to cannabis, coca leaf and certain novel psychoactive substances.Ensure equitable access to essential medicines, in particular opiate-based medications for pain.

In other words, decriminalize drug possession, legalize and regulate drug markets, and end the failed decades-long embrace of prohibitionism. This is a policy advance from the Commission's initial 2011 report, which, while breaking new ground in advancing the debate of drug prohibition, did not go as far as calling for efforts to regulate and legalize drugs. 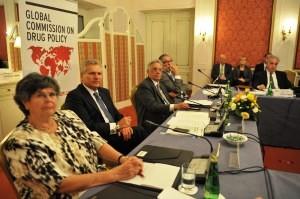 "Ultimately, the global drug control regime must be reformed to permit legal regulation," said Cardoso. "Let's start by treating drug addiction as a health issue -- rather than as a crime -- and by reducing drug demand through proven educational initiatives. But let's also allow and encourage countries to carefully test models of responsible legal regulation as a means to undermine the power of organized crime, which thrives on illicit drug trafficking."

"Health-based approaches to drug policy routinely prove much less expensive and more effective than criminalization and incarceration," said former Mexican President Zedillo. "Decriminalization of drug consumption is certainly crucial but not sufficient. Significant legal and institutional reforms, both at the national and international levels, are needed to allow governments and societies to put in place policies to regulate the supply of drugs with rigorous medical criteria, if the engines of organized crime profiting from drug traffic are to be truly dismantled."

The Commission's report today is only the latest evidence of growing global momentum for fundamental drug policy reforms. After the Commission's 2011 report, sitting Latin American heads of state, including Presidents Juan Manuel Santos in Colombia, Otto Perez Molina in Guatemala, and José Mujica in Uruguay, as well as then-President Felipe Calderón in Mexico, for the first time made drug reform a major topic at the Summit of the Americas in April 2012 in Cartagena, Colombia.

That was followed 13 months later by an Organization of American States report, commissioned by the heads of state of the region, calling for consideration of drug legalization along with other possible scenarios as a potential policy alternative. And late last year, Uruguay broke new ground, becoming the first country in the world to legalize and regulate marijuana commerce.

All of this has created a big push for a new look at global drug prohibition during the UN General Assembly Special Session (UNGASS) on Drugs set for 2016. The last UNGASS, in 1998, was dominated by rhetorical calls for a "drug-free world" and ended with unrealistic goals of suppressing illicit drug production (which, of course, have not been met), but the Commission and the global political leaders whose voices it echoes are working to use the next UNGASS to advance a frankly and radically reformist alternative. 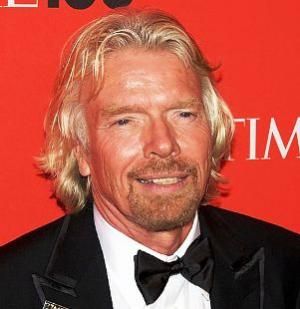 "We can't go on pretending the war on drugs is working," said Richard Branson. "We need our leaders to look at alternative, fact-based approaches. Much can be learned from successes and failures in regulating alcohol, tobacco or pharmaceutical drugs. The risks associated with drug use increase, sometimes dramatically, when they are produced, sold and consumed in an unregulated criminal environment. The most effective way to advance the goals of public health and safety is to get drugs under control through responsible legal regulation."

American drug reformers liked what they were hearing.

"When the Commission released its initial report just three years ago, few expected its recommendations to be embraced anytime soon by current presidents," said Ethan Nadelmann, executive director of the Drug Policy Alliance. "But that's exactly what happened, with Colombian President Santos and Guatemala President Perez-Molina speaking out boldly, former Mexican President Calderon calling on the United Nations to reassess the prohibitionist approach to drugs, and Uruguayan President Mujica approving the first national law to legally regulate cannabis. Meanwhile, one Commission member, former UN Secretary General Kofi Annan, has opened up the drug policy debate in West Africa, recruiting some of the region's most distinguished figures," he noted.

"The import of the Commission's report lies in both the distinction of its members and the boldness of their recommendations," Nadelmann continued. "The former presidents and other Commission members pull no punches in insisting that national and global drug control policies reject the failed prohibitionist policies of the 20th century in favor of new policies grounded in science, compassion, health and human rights. There's no question now that the genie of reform has escaped the prohibitionist bottle. I'm grateful to the Commission for the pivotal role it has played in taking drug policy reform from the fringes of international politics to the mainstream."

"With polling having shown consistent majority voter support for legalizing marijuana in the US for several years now, it's been clear that this is a mainstream issue in this country," said Tom Angell of Marijuana Majority. "Now this group of world leaders has not only put marijuana legalization on the table for serious consideration on the global stage, but has gone even further by suggesting that ending the prohibition of other drugs should be considered as a way to better protect public health and safety. The hope now is that these forward-thinking recommendations by so many respected former heads of state will encourage current officials to modernize their nations' policies."