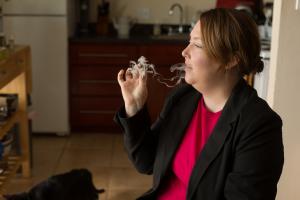 Massive Online Polling Survey Finds 58% Support for Legalization. The online polling data company CivicScience has released the results of a massive, two-year online poll that asked more than 450,000 US adults whether they would "support or oppose a law in your state that would legalize, tax, and regulate marijuana like alcohol." Some 39% said they strongly supported, and another 19% said they somewhat supported the idea. That's 58% for legalization. Support is even higher in the last three months, with 61% of recent respondents saying they favored legalization. The results are music to the ears of Marijuana Majority head Tom Angell. "This huge poll is yet another indication that marijuana legalization is officially a mainstream issue. With ending prohibition polling better with voters than most elected officials do these days, it'll be really interesting to see which 2016 contenders realize that supporting marijuana reform is good politics and which still don't get it," he said.

Nebraska Legislature to Consider "Problems" of Colorado Marijuana Legalization. Next Monday, the legislature's Judiciary Committee will hear testimony on LR 520, a resolution "to gather information about the developing problems that law enforcement is encountering since the State of Colorado legalized the sale and recreational use of marijuana." The Marijuana Policy Project is encouraging legislators to examine all the results of legalization in Colorado, not just the "problems."

New Florida Poll Has Medical Marijuana Initiative Coming Up Just Short. A new Florida Decides poll has a majority in favor of the Measure 2 medical marijuana initiative, but not the supermajority needed to pass a constitutional amendment. The poll had support at 57%, but 60% is needed. But the poll also had 17% undecided, and if only a fraction of the undecided break in favor of the initiative, it could win. Another poll earlier this week had support at 64%.

Ohio Man Kills Himself During Marijuana Garden Raid Stand-Off. An Ashville, Ohio, man shot and killed himself after a two-hour stand-off at a property where he was growing marijuana Tuesday evening. Timothy Sturgis, 42, becomes the 32nd person to die in US domestic drug law enforcement operations so far this year.

California Defelonization Initiative Quietly Awaits Opposition. An initiative that would reduce petty drug (and other) offenses from felonies to misdemeanors, Proposition 47, is qualified for the November ballot and is now quietly waiting for a backlash to emerge. It polled at 57% in June and has $3 million in the bank. Opponents have raised only $8,000. But there are still two months left.

Saudi Arabia Beheads Four Foreigners for Drug Trafficking. Three Syrians and an Iranian were executed by beheading for drug trafficking offenses, the Saudi Interior Ministry said. The three Syrians were executed for smuggling "a large quantity of banned amphetamine pills" into the kingdom, and the Iranian was beheading for smuggling "a large quantity of hashish." That makes 45 executions in Saudi Arabia so far this year. It's not clear how many were for drug offenses, but the Saudis also executed four people for hash offenses last month.